The Author of Iceland 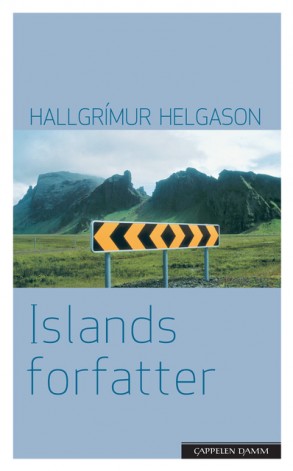 ​Bloody nonsense this is. Who is he, this lad? Once again he pokes my cheek.

Helgason’s biggest and most ambitious novel, Höfundur Íslands (The Author of Iceland) was a succès de scandale, since the main character was based on the famous Icelandic writer, Halldór Laxness (1902-1998), who received the Nobel prize in 1955. The novel tells the story of a very old and famous Icelandic writer who has died and who, after his death, wakes up inside a novel he wrote some fifty years earlier. Thus the author lives on in his work. The main character, Einar J. Grímsson, is partly based on Laxness, and the novel he’s trapped in is inspired by Laxness’s biggest novel, Independent People. The publication of “The Author of Iceland” caused outrage among the old leftist elite in Iceland who felt it was sacrilege to write about Laxness, especially his communist past.

For this novel Helgason received the Icelandic Literary Prize in 2001.

The German translator, Karl-Ludwig Wetzig, received the Dialog-Werkstatt Zug prize for his translation.

“Even people who have no interest in geysirs, sheep or Halldór Laxness can but praise and love this big European novel.”
— Rainer Moritz, Die Welt