The Hitman’s Guide to Housecleaning 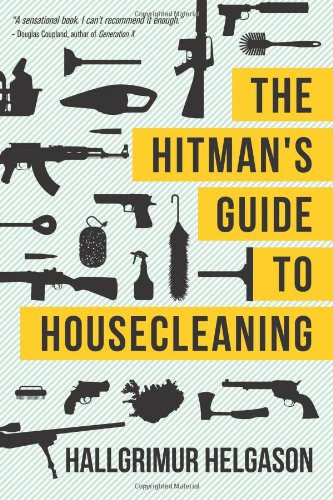 My mother named me Tomislav and my father was a Bokšić. After my first week in the US, I’d become Tom Boksic. Which then led to Toxic.​

​The thing I am today.

​I often wonder if it was me who poisoned my name or the name who poisoned me. Anyway, I bring danger. At least, that’s what Munita says. She’s addicted to danger. My darling explosive. She was living in Peru until her family got killed in a terrorist bombing. Then she moved to New York and found a job on Wall Street. Her first day of work was 9/11. Our first trip to Croatia together she witnessed two killings. I have to admit that one of them was executed by myself, but the other one was totally accidental. I thought it was a quite romantic scene, actually. We were having dinner in Mirko’s restaurant when the guy sitting at the table next to us got a bullet through his brain. Some of his blood jumped into Munita’s glass of wine. I didn’t tell her. She was having red anyway…

Helgason’s only novel written in English is also his only flirt with the crime novel genre. Tomislav Boksic, aka Toxic, is a professional hitman for the Croatian Mafia in New York. His record is near flawless, he has 66 killings on his CV, when killing number 67 proves to be a failure. The victim turns out to be an FBI guy. Forced to flee the States, Toxic finds himself at JFK at the beginning of the novel. There he spots the FBI waiting for him at the gate. He turns and hides in the men’s’ room, contemplating his moves, when out from one of the stalls comes another bald guy, who looks a bit like him. Being a pro, Toxic kills the bald man, takes on his clothes, ID, passport and air ticket. The dead one turns out to be a TV-evangelist from Richmond, Virginia, on his way to Iceland to preach on a local Christian TV station. So the Croatian hitman arrives in Reykjavik, disguised as a TV preacher. A classic tale of mistaken identities, the novel asks the question: Can the bad guy become good? It also offers an outsider’s view of Iceland, that according to the author was “a fun challenge: To write about my home country as if I had never been there before”.

Four years passed before the original found its way into print, when the novel was picked up by Amazon Crossing and published worldwide in 2012. It became a bestseller on amazon.com, peaking at no. 1 in Thrillers, only two weeks after publications, and has earned over 450 readers’ reviews on the bookselling web, the highest score of any Icelandic book. Film rights were sold to Miso Film in Denmark, and pre-production is underway. A stage version of the book, done by Peter Arp, ran for a few weeks at the Schauspielhaus Salzburg, Austria, in the fall of 2011, and German movie star Uwe Ochsenknecht did his own stage version of it, that traveled around Germany.

Douglas Coupland, author of Generation X, characterised the work as “a sensational book. Hallgrimur Helgason’s brain is like this amazing app that morphs the English language into gorgeously blunt new forms. It delivers surprise after surprise and makes you feel good about books again. I can’t recommend it enough.”

“On every third page you feel the need to call your friend and read out loud for him a clever passage so that he can laugh with you.”
— Christine Westermann, WDR 2 Bücher

“With Hallgrimur Helgason, like with St. Paul or Hunter S. Thompson, the grace and the sin are two links of the same chain. And the craziness starts where puritanism ends. You die from laughter.”
— Sébastien Lapaque, Le Figaro Littéraire