On a trip to Mozambique in January 2009, right after the economic crash of 2008, Helgason acted out the bitter end of “the Icelandic Expansion”. The title of the exhibition is therefore quite ironic, since by 2009 the Icelandic expansion did not exist anymore. This phenomen had been created by the bubble years; Icelandic businessmen took their wealth abroad where they bought shares, stocks, buildings and companies. All of a sudden our local boys had become big players on the international money stage. This trend was called “útrásin” in Icelandic (the expansion) and was often compared to the viking raids of the past. Slowly Icelanders took pride in those business vikings and all their heroic investments. They became the stars of the moment. Then, in October 2008, it all came crumbling down. All their newly founded empires turned out to have been built on loans. And when the money flow stopped, they all went bankrupt.

The use of the two plastic bags was symbolic. Bónus is a famous chain of supermarkets in Iceland and was founded by the main star of the expansion, Jón Ásgeir Jóhannesson. This is where he started his empire that in the end included Hamley’s in London, House of Fraser and many more. In the beginning he was a young maverick that took on the old established merchants who’s greed had for decades been protected by the political party in power. After the turn of the century Helgason wrote articles defending Jón Ásgeir, admiring his courage and cleverness. Thus Helgason was by some branded “a Bónus pen”. So here the use of the Bónus plastic bags bears a personal burden, since Jón Ásgeir and his friends had, with the crash, become the bad guys. In the end they turned out to be way more greedy than the old bunch, and much more of a threat to their country.

By dressing up in the classic Icelandic woollen sweater “lopapeysa” Helgason plays with the fact that the day after the crash, the suit & tie types of the business world had switched over to this suddenly trendy we’re-back-on-earth uniform. The traditional arctic woollen cap also becomes quite absurd in the warm temperatures of Africa.
The use of the white duty free bag from the Keflavik Airport symbolises how Iceland has always been free of duty when it comes to international affairs. This fact had, with the crash, become quite absurd, since now Iceland had to rely on help from other nations. At the end of the series Helgason, acting out his country’s situation, takes on the role of the street beggar, underlining how absurd a western “recession” is to the rest of the world.

The series of photgraphs were shot in and around Maputo, Mozambique. Therefore the title and the writing is in Portugese. “Bancarrota Islandia, ajuda por favor!” (Iceland is bankrupt. Please help!) They were all shot by Helgason’s daughter Hallgerður Hallgrímsdóttir, a professional artist photographer. The series were shown at The Contemporary Art Gallery, Reykjavik, in October 2009. 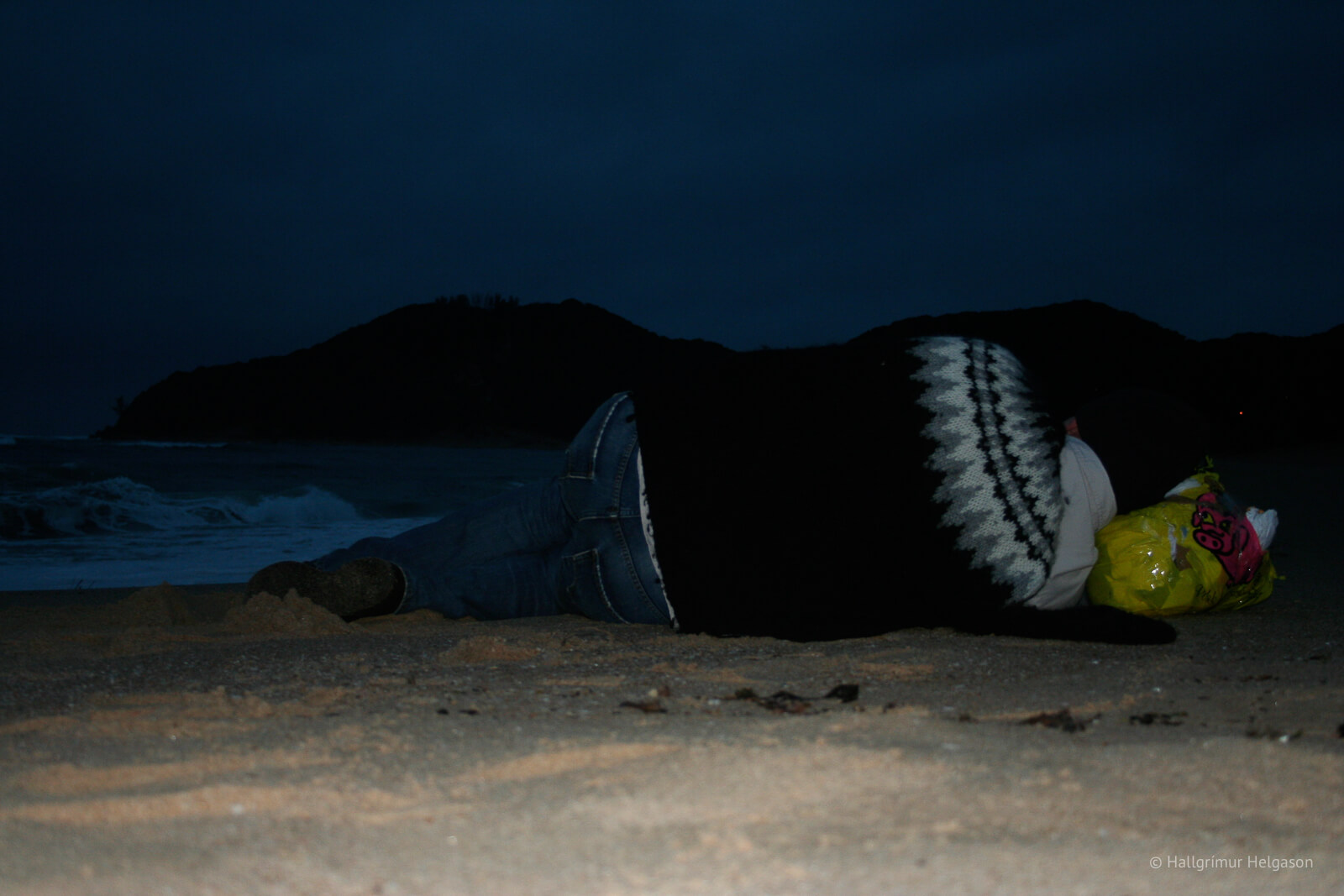 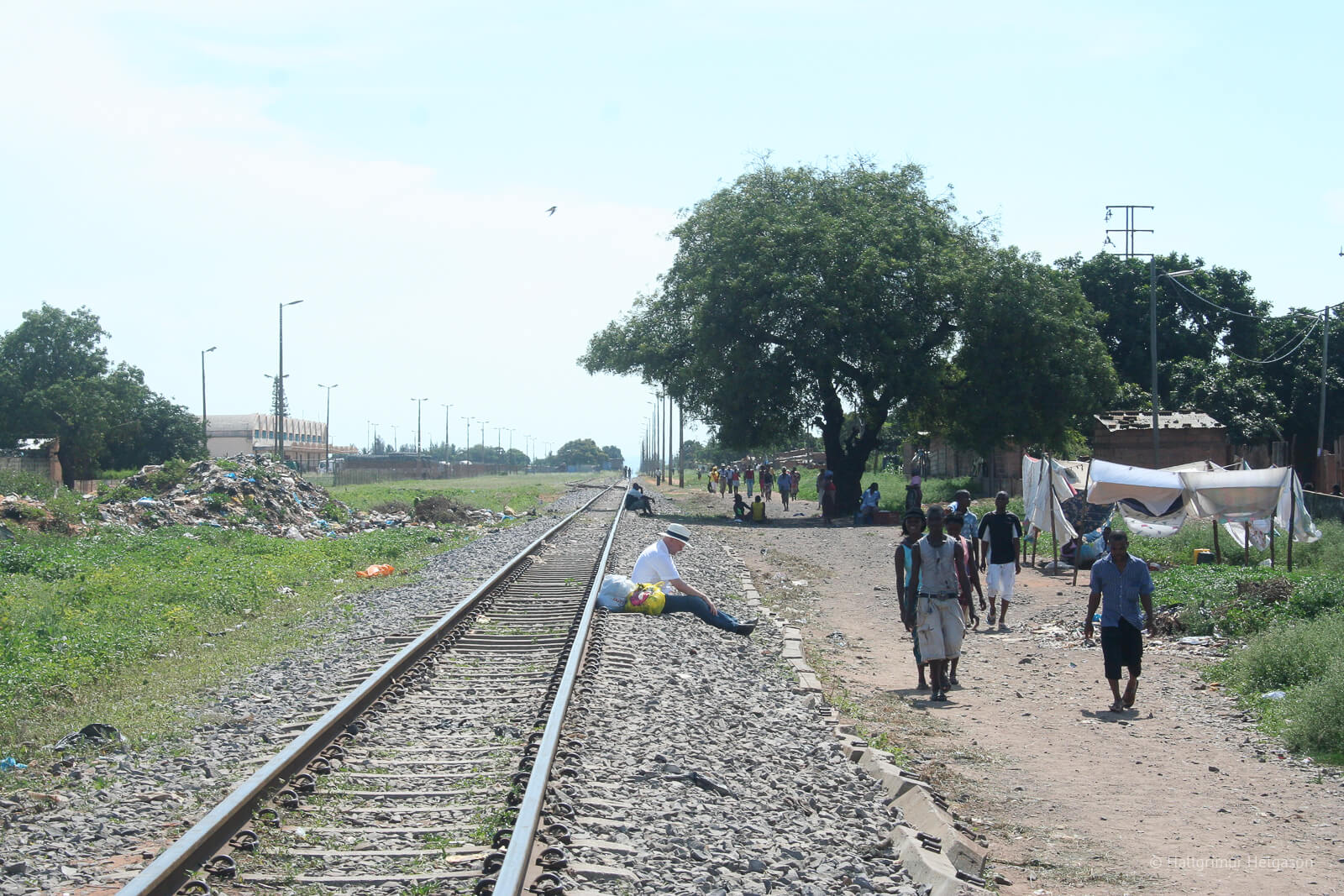 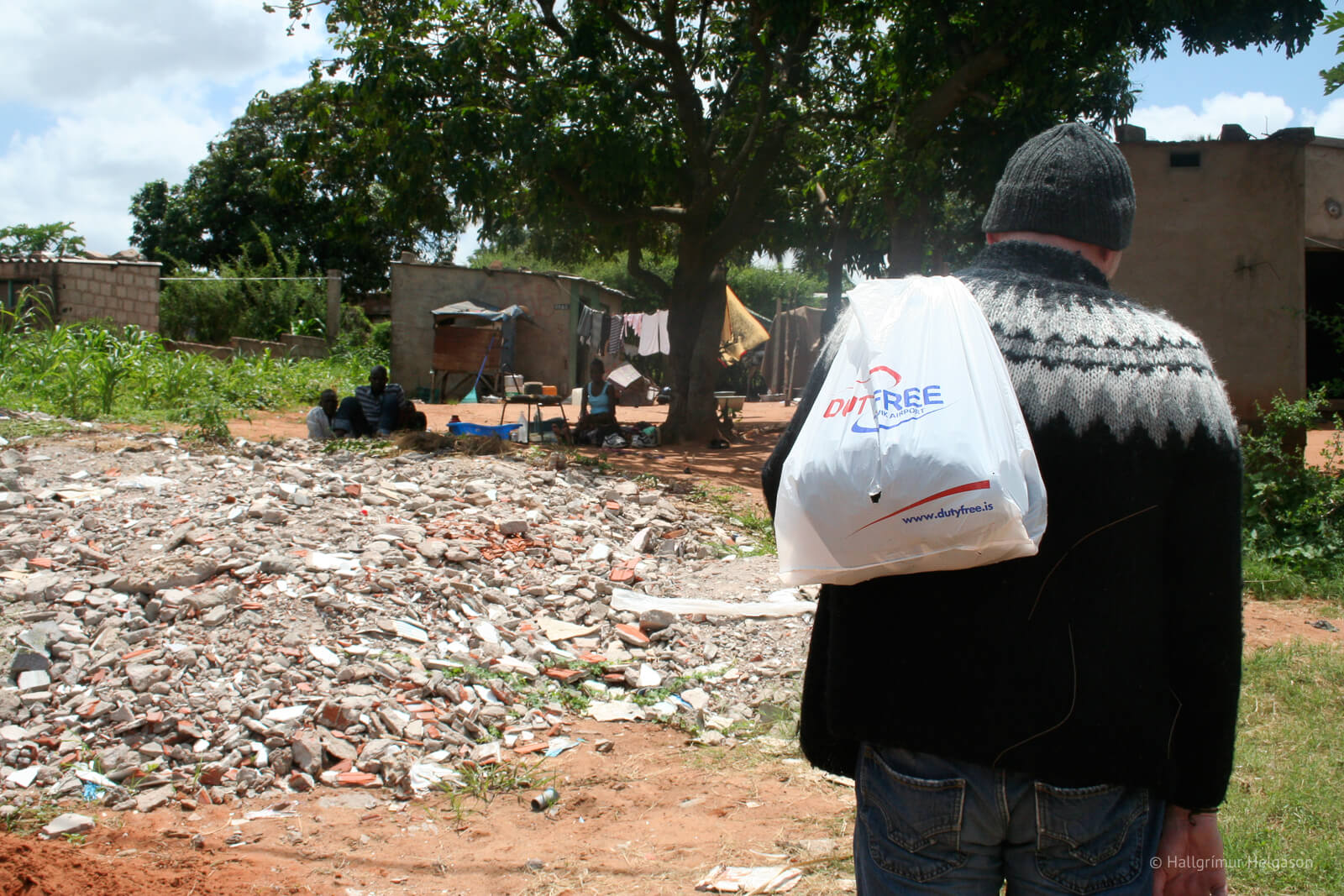 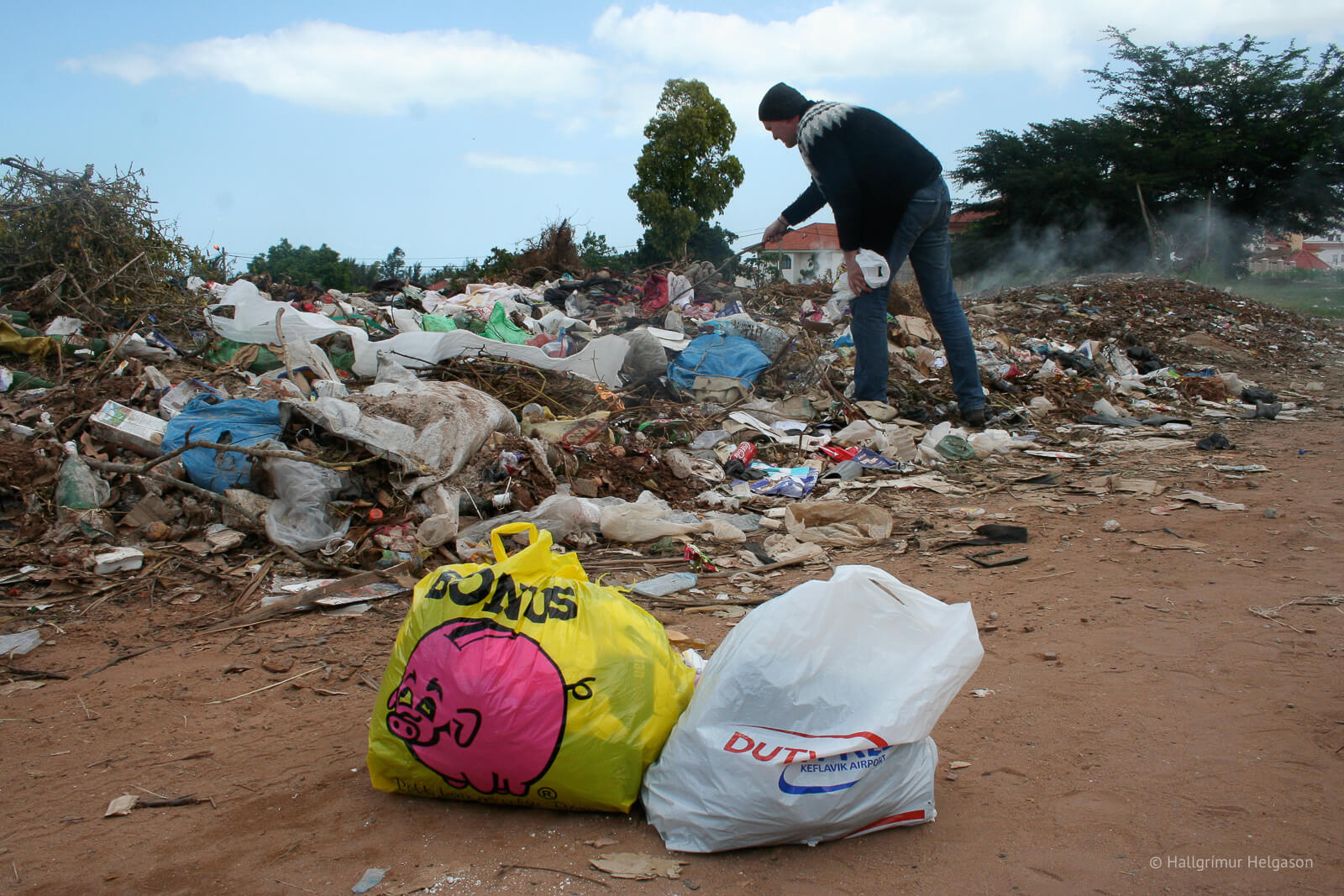 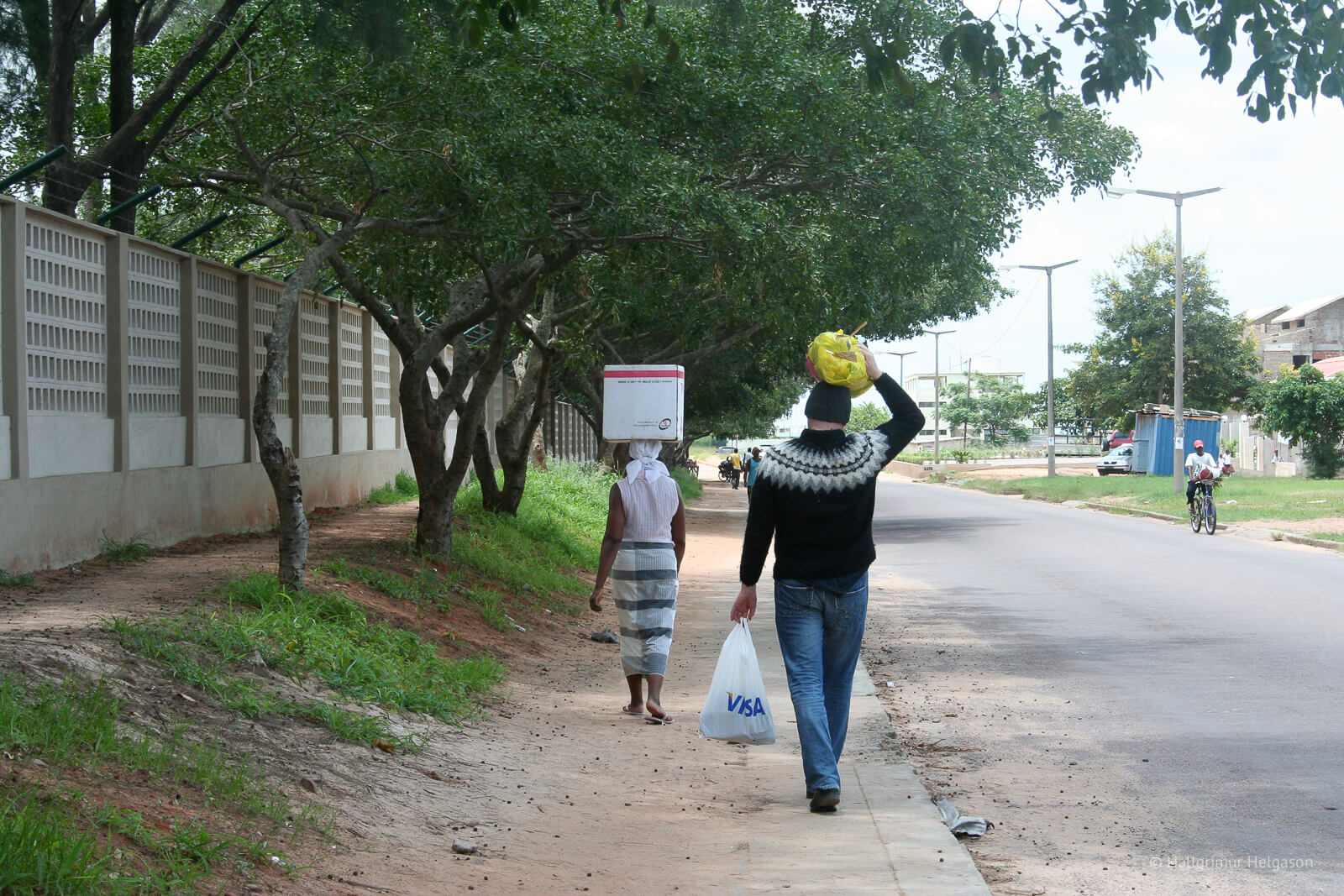 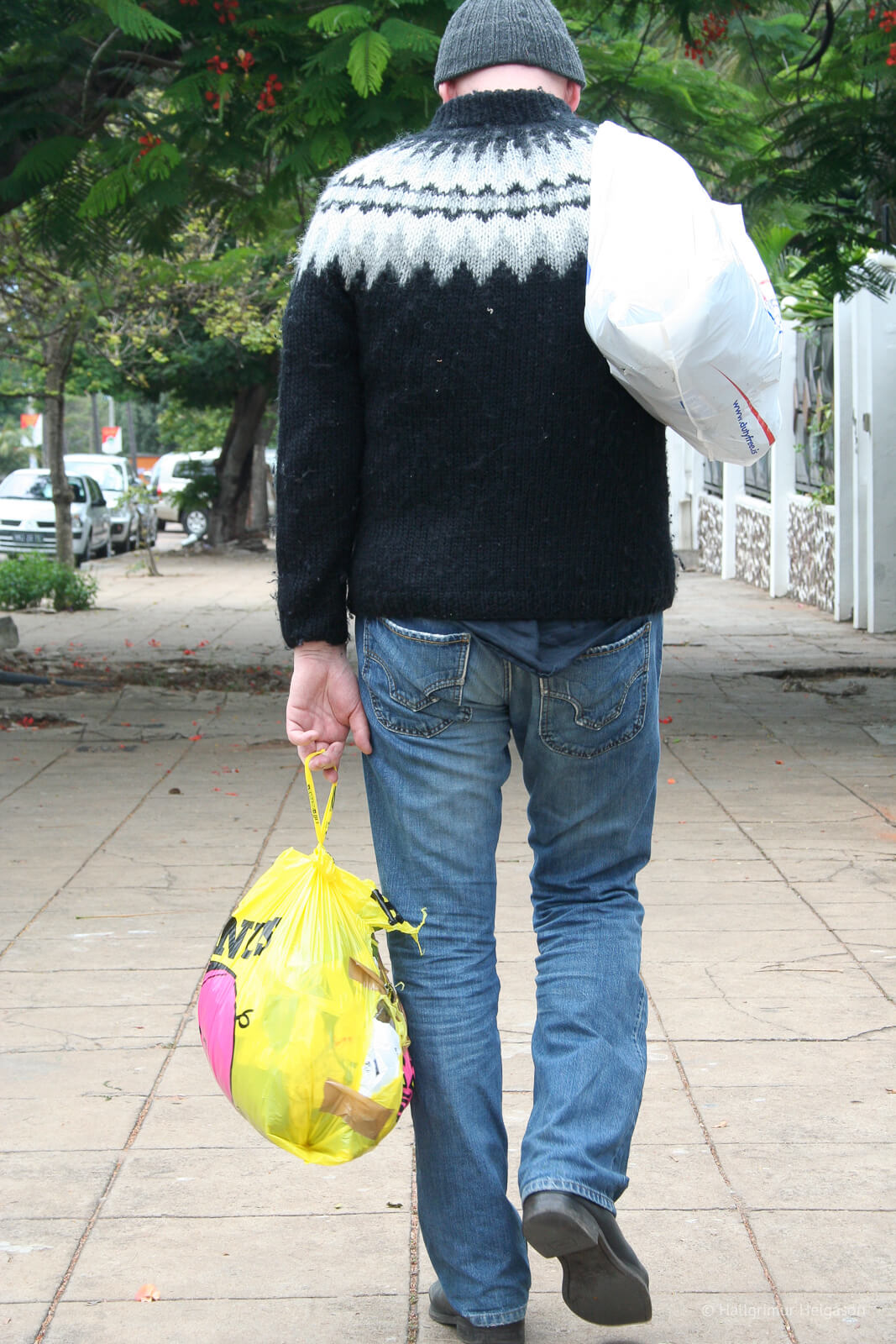